How I Became an Entrepreneur? I Followed my Passion!

Home/Illuminations Blog/How I Became an Entrepreneur? I Followed my Passion!
Previous Next

How I Became an Entrepreneur? I Followed my Passion!

Exciting, stressful, rewarding, challenging, ever-evolving, and like having another child at times. These are just some of the words and ways, I describe being an entrepreneur when someone asks me what it is like to own my own business.

When I look back to the time leading up to starting my company, I was what I would call dreamy, inexperienced, young, daring, fearless (and I think I should have had some fear), headstrong, and had not a clue of the climb and journey that was ahead of me. I always loved to write, and I have been fortunate to be able to make a career of, and to create a business that is centered around, the written (and spoken) word. It’s all communications in the end. And so, it goes…

I was a bootstrapping radio writer and reporter who started in a small market (Decatur, Illinois) at Newstalk 1340 WSOY. These are the places that most media people start their careers. After a few years I applied for radio jobs in the third-largest U.S. media market – Chicago – which would bring me back near to family and where I was born and raised in Deerfield. I got hired by Shadow Broadcast/Metro Networks, with some help from news reporter/radio icon Bob Roberts (formerly of Newsradio 780 WBBM) who pushed my resume along to the right person.

Metro Networks was a newswire service that supplied articles (like what the Associated Press does worldwide) but for Chicago area news media only. I became one of their writers and it was our team’s job to provide news on the wire (literally) ready by 5 a.m. morning drive while adding fresh stories throughout the day. Shadow Broadcast was the producer of Shadow Traffic – which was a household name for people of a certain age at this time (mostly over 40). What people often did not always realize was that the company also produced Shadow News, Shadow Weather, and Shadow Sports. I ultimately reported news, traffic, and weather (and an occasional sports report when I had to jump in) …but traffic was new to me. Bart Shore, who remains a well-respected traffic reporter even today in Chicago, worked there too. I remember the day I started training with him in his studio, where he reported traffic for none other than the number one station in Chicago, Newsradio 780 WBBM. I was to learn from one of the best. And I did.

So ‘Shadow’ employed all sorts of radio artisans – and while listeners thought we were physically at the stations we reported on, we actually broadcasted from the 13th floor of the former Chicago Title and Trust building at Clark and Randolph in the Loop. It was a place that was full of life, and there was a certain pulse there – it was completely exhilarating and inspiring. I felt like I was where I was supposed to be and working alongside some extremely talented individuals. I would work all four different shifts – sometimes within the same week! I always said yes, and this was after the advice of my former radio station manager back in Decatur at WSOY, Joel Fletcher, who said, “Do whatever they ask of you and figure out how you’ll do it later!” My hardnosed news director, Wendy Goldman, would stand behind me and whip me into a better writer, every day! She was relentless. She used to say, “Fake it till you make it, kid,” and then would give me huge assignments like covering the Cubs opener or the indictment of former Governor George Ryan. Which I did.

Now to the part that changed my course in life, and what pushed me in the direction of becoming an entrepreneur. Gradually over time, my formerly 3-minute newscasts on WLS 890 AM began to shrink; first to 2:30 of news, and 30 seconds of reading an ad. Then 2 minutes of news and 1 minute of reading an ad and so on until my newscasts were only one minute – three news headlines read in 60 seconds. It was becoming much less about communication and reporting the news – and much more about the almighty dollar.

I looked it all over and lamented about leaving this creative place that captivated me. It gave me the ability to try so many things – to spread my creative wings and make money doing it. I learned so much from some of the best talents on the radio at that time. I then thought of my parents, an aunt, and my three uncles, all immigrants, who started their own small businesses that I watched grow as a child and young adult. After deep contemplations, I took a leap and started what would someday become Vicarious Multimedia. 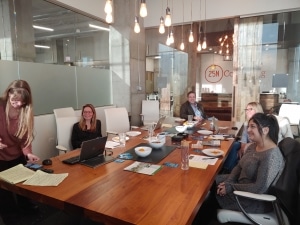 I had no resources really but had many ideas that I thought were awesome (some were and worked, some were not and didn’t). While I was still writing and communicating, it would now be for MY clients, where I could set MY own rules, and there would be NO selling out. I literally dreamt of building a communications firm that provided the gold standard for my [future] clients, to get them in front of the ‘right’ crowd in the ways I knew I could. I believed I could help others to be successful in business or through their organizations, and that inspired me, too.

What started out as Santo Stefano Productions (2004-2006), became Vicarious Productions (2006-2018) and has now evolved into Vicarious Multimedia (2019 to present). The name changes are significant because they represent the different evolutions that all businesses and organizations should remain open to undergoing. In our case, our name now truly represents who we are, what we do and how we do it. We Vicariously work through the eyes of our clients to competently communicate on their behalf, through multimedia channels that are customized for their unique needs. There is no one size fits all, no advertiser sell-outs, and real value for the clients of Vicarious Multimedia.

It’s been a wild ride for sure, but one I do not regret, and there is a common theme. I found success earlier in my life by simply following my passion. When that took a turn, I turned as well and created something that fell in a new line with what I love – communications.

About the Author: Melanie